As a child in grade school there was a time when the teacher had a butterfly cocoon for us to watch. I seem to recall how hard it was watching that thing for the longest time and wondering if the teacher was just playing a trick on us. I mean really, THAT thing is alive??

Honest! Didn’t the caterpillar in Disney’s Alice in Wonderland spin his cocoon and transform into a butterfly in record time? I saw it with my own two eyes!

Then there were my teen and young adult years when I fervently listened to the musical team of sisters called Heart (or was it Hart?). Anyhow, I remember a popular song about the Dog and Butterfly. Although I can’t recall the words to that song at this moment I assure you if it were to come on the radio I could sing every word and not miss a single note.

Present day. I have previously written about Mosey Cottage and most recently referred to this house as being in the chrysalis stage. Days on end pass and I see more WRONG with the two livable rooms than what I see being done with the rest of the house. BUT I recently had a tidbit of stirring that was made visible to me. The kids had a couple of contractors to come in and evaluate the need for offering their estimates. I met the first man. I liked him. He was excited about his craft and saw the opportunity to work for us and still be able to have a bit of leeway in what he loves to do. My son in law liked him too. I was told that they most likely will go with this man’s estimate. Maybe. The second man I never met. I understand he acted like his work was a drudgery and he could care less. Phooey on the nay-sayer who wants to drag his feet! (I still expect the chrysalis to spin and produce a beautiful butterfly like Alice’s caterpillar).

What does a dog have to do with any of this? >sigh< Cub is a hound dog. A mix breed of hunting dogs. He points and flags. Forget the heeling. He pulls and drags if you fall while trying to manage his leash. Forget the hunting although his nose is always sniffing something to track. And I do believe he’d just as soon EAT a butterfly as to chase it. This is my daughter’s dog. NOT mine! My Daisy is much cuter (wink wink).

My daughter has been roughing it in the front two rooms of my Mosey Cottage for nearly a year now. Family stuff happens and jobs change and now I find myself “dog sitting” so she can keep her job. You see, Cub suffers from severe separation anxiety. He has broken through three windows, two doors, torn up the carpet, shredded a couch…..need I say more? As long as he is WITH somebody he knows he is fine.

He is a bit tamer and a little more behaved since I started keeping him. I usually keep him in Mosey Cottage. In fact I have spent enough time there that I’m beginning to feel a bit more like maybe someday I WILL be living there. Sure keep hoping so!

It is interesting to watch a chrysalis from the inside. It isn’t what I had expected. I mean who would have ever believed me if I told them that this chrysalis is helping to transform a DOG? 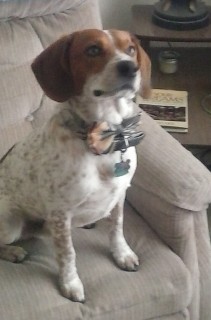 Cub in his hound dog cuteness…. 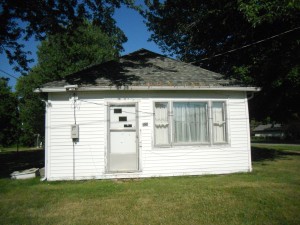 the Chrysalis of Hope

This being October first of the year 2015 I have accepted a challenge to write and share on a daily basis. I have chosen to share about the Woes of this Chrysalis of Mosey Cottage. Indeed it has become a hardship for me AND my children. My oldest has taken on the challenge of living in this chrysalis. It has NOT been easy as she is forced to live in the front two rooms. She totes water and cooks the same as if she were camping.

In the meantime this Chrysalis has spewed out her husband for at least the next year. Except this chrysalis begin to transform then he may not get to return to this home. Nor may I ever get to live within it’s sanctuary. And the fear remains and maintains itself that my girl could also be spewed forth as well to find herself homeless.

Oh my, you say? Indeed. I am convinced that God wanted my younger kids to obtain this place for me. I KNOW that He answered prayer on the day of the auction. They were the only ones to bid and were blessed to purchase it for several thousand dollars less than the asking price. We all rejoiced. A handicapped home with a huge built in garage that was to become my workshop/craft room.

I have obtained two beautiful grand babies since this day of purchase. We also obtained a HUGE problem under the house that had not been disclosed to any of us prior to the sale. I LOVE and ADORE my grandchildren. I marvel at this gaping hole in the ground that nearly swallowed my son in law which was later spewed. I HATE the lingering on the “what do we do now?’……Isn’t it rather obvious? Fill the hole, cover it, and continue with the plumbing issues. I don’t understand at all why this is a problem.

So this is the beginning of my 31 Day writer’s challenge. My precious Chrysalistic Hole that I want so BADLY to occupy. But I know that opening a chrysalis before its time will ruin the beautiful outcome and desire. So in the meantime I shall continue to pray and seek out people who would help without cost. Pay it forward, please. I need this badly. I haven’t the funding otherwise. Pray again. Watch and wait.

Until tomorrow I bid your Chrysalis in better shape than mine.

Greetings to all who are reading! I can scarce believe it is already into February of 2015. Did I say Happy New Year?

Some time back I had shared about what is, or was, to eventually become my new home. I had dubbed it as “Mosey Cottage” after my late husband. His heir, our daughter, along with her husband, bought me this house with some of her inheritance money. (I always had said that her dad would buy me a house someday. I never expected it to be by proxy after he was gone!).

Anyhow,  this entire past summer and well into fall was spent on everything BUT the house. My kids bought new cabinets and a counter top for the kitchen back in September for a steal! BUT…..we never could get the electric people there until well into October or November. Then we were well into our busy Holiday time and it was way too cold to really do much work on the house. The poor kitchen sat looking like this for a long time:

One view of the “before” kitchen

Pitiful, isn’t it? You can see that the flooring is taking quite some effort to get torn up and out. You wouldn’t think that water logged wood and such would be so hard!

Ok. Now comes a new twist in the adventures of Mosey Cottage. My oldest daughter and her new husband found themselves in a life situation that has landed them into the front two rooms of the house! The original bedroom is now a bedroom/kitchen combination. 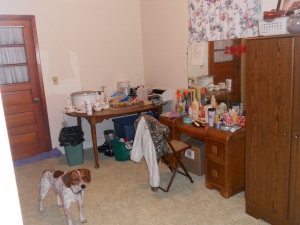 Making good use of space.

They’ve done fine with the living room. Not how I would decorate but it suits them. We scrambled to get some kind of heat going. That’s when I found out that son in law #1 had turned on the ventless gas wall mounted heater.

Gas wall mount is just to left of picture.

That thing scares me and I don’t trust how the gas lines are run into the house but when you need heat you go with it. I also sent over my electric fireplace/heater. I have to say that between both heat sources it hasn’t been too bad for a two room living arrangement. 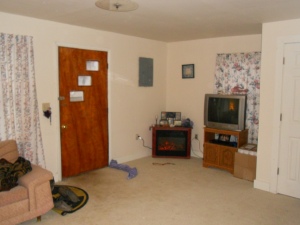 Remember the undone kitchen? The bathroom is part of the problem too. It is also rotted out. My kids have to cross the street/intersection to run to my youngest girl’s house for bathroom facilities and water. I guess they are camping in the best tent possible!

YESTERDAY, while son in law #2, the one living there, was working on tearing out flooring at son in law #1’s request, he nearly fell into a WELL!!! Or a cistern. Not sure what exactly it is and not sure if the previous owners or even realty people knew this was there!

It’s in this corner

Looking into the abyss

covered in brick and caving

Yep. He was tearing up flooring and having to use a shovel in places. When he turned I guess this is what he found! Frightening! We aren’t sure how deep. The flash from my camera shows some kind of metal rods or piping down there. It also shows some kind of algae on the water. I’m just glad it is too cold for snakes!!! >SHUDDER<

I suppose now son in law #1 will have to bring in people to assess what we have to legally do with this new find. I’m sure the city has some laws about old houses built with cisterns and such. I don’t have a clue what the insurance people will think about this! And I really don’t believe the original owner knew it was there! House was built in the 1930’s is what I was told. Were houses built over cisterns during the Great Depression? I KNOW they were built this way at the turn of the century (1900’s). Another twist to all of this is the fact that a major Marathon oil refinery lies about three blocks to the east! >sigh<

Mosey Cottage appears to have taken on a life of it’s own. And for now my daughter is enjoying the adventure first hand as I can’t begin to live primitive.

I would LOVE to hear all your feedback on this one! Anybody else ever have such an experience?

Haha! Life in the Whole has taken on a whole new meaning. THIS hole has water in it!

Enjoy your life. And all it’s holes!